I have no travel goals. There is no must-see list of countries in my head. There are just places I would like to see one day. It is only after I visit the place when I realize it's fascinating and would like to go back again. The northernmost state of India, Jammu and Kashmir, certainly belongs among these places.  We are planning to do something that probably no-one with legendary Trabant, Polish Fiat and ancient Jawa 250 has ever tried: to pass the dreaded Himalayas in Kashmir and reach the altitude of 5,300 m above sea level on tires. 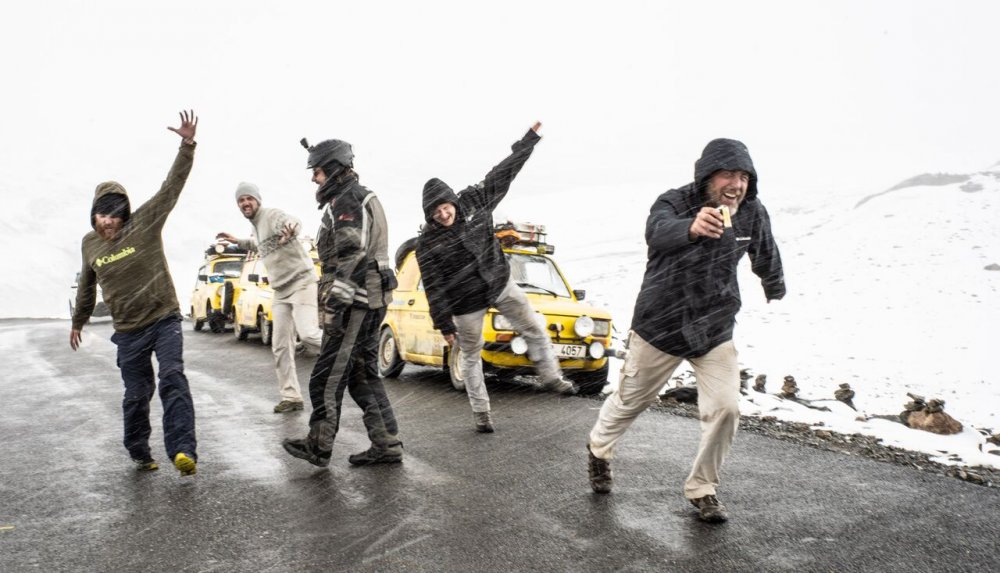 Before we enter Kashmir, we see a few scooters and I just think to myself it is not the best idea to roam the region on these weak machines. Then I look around and realize I am sitting in Trabant. Our first challenge on the road is Zoji La pass. Unpaved narrow roads carved in a hillside take quite a lot of effort to drive through. We see an overturned truck by the road. I am testing the brakes immediately to find out whether they can save us from a similar fate. I am not quite convinced, but there is no way back. The goal is set: we are conquering Kashmir. With steep ascend and slippery rocks on the road, the wheels are failing and I am not able to move forward. Our photographer Vojta is taking over the driver's seat and he is trying again. To my surprise, he is not doing any better. In the end, our experienced chief Dan is taking charge and with the help of several horse powers and two panting donkeys pushing the car from the back, the car slowly climbs the hill. We manage to get through the pass and have no energy left. This one was only 3,528 m asl and there is one more much higher just ahead of us, the highest pass in our expedition. 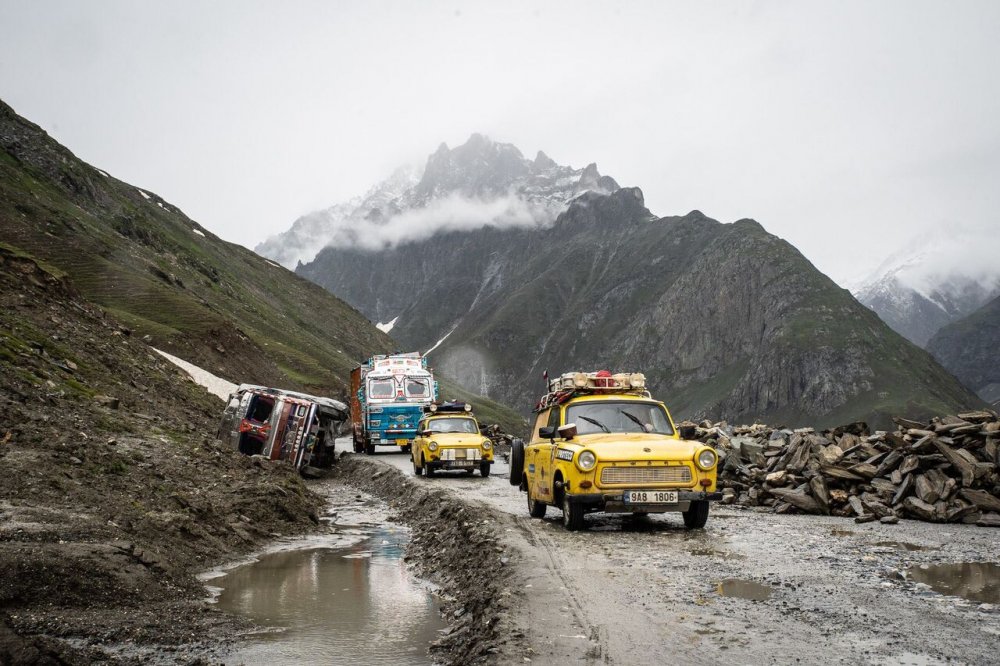 We are camping in a valley surrounded by majestic mountains. Last couple of days our routine has not really changed.  We pack the tents, shift into first gear and start ascending slowly. Occasionally, we might even change to second gear. For every 1,000 m we ascend, our cars lose 10% of power. And that was quite miserable at the sea level already. It's not only engines depriving, our team members are losing energy and breath as well. The lack of oxygen affects our physical condition and mental capacity, too. We cannot move without a car and our vocabulary has been restricted to a few basic phrases, 90% of which are swear words. With rising altitude, vegetation disappears and we are surrounded by bare rocks and snow. To Indians, the snow seems to be more attractive than our crazy vehicles. It starts snowing and we pull over to take a few pictures and make a video. After a while, two more cars stop by us and the Indians invite us for a dance. We hear Panjabi tunes from their car so we join them. Bollywood director would hardly create a better scene. 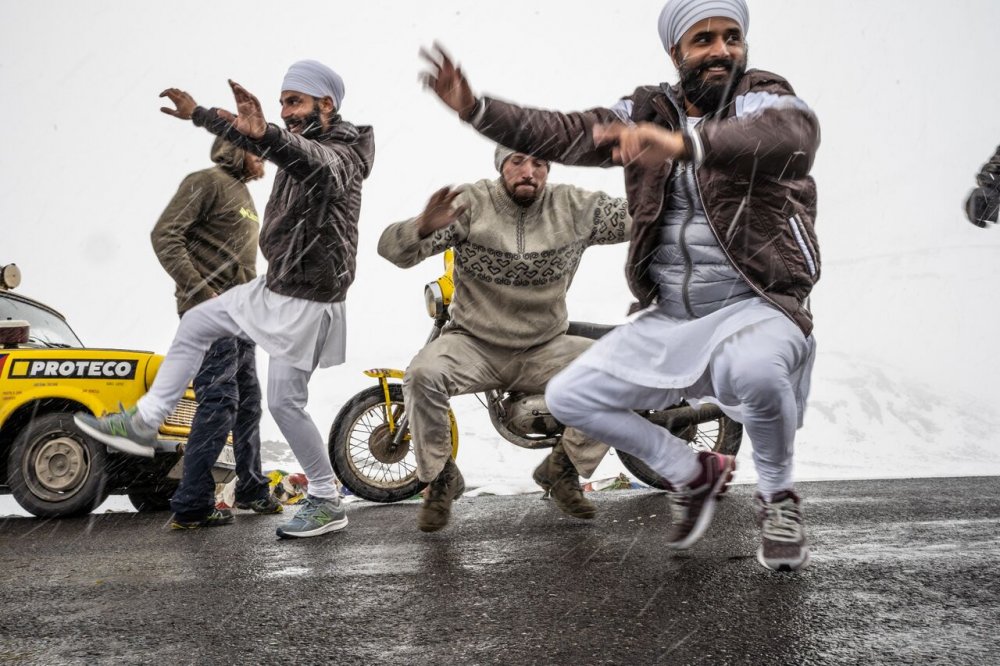 The road to the peak is covered partly in gravel and partly with asphalt. Luckily, the steep and most critical parts are the asphalt ones. Very slowly (and in first gear) we proceed to the highest point of the pass. We made it! Taglang La pass lies at 5,329 m asl. That's  more than twice as high as the highest peak of our home country (Gerlach in Slovakia).

We rush out of the cars and we are joyfully jumping around like kids at the playground, though we can barely breathe. We take a picture together and move to the jurt, where we have a traditional tea with milk and without extra charges. So the highest point is conquered, now it'll get only easier, I think to myself. I have no idea how wrong I am. 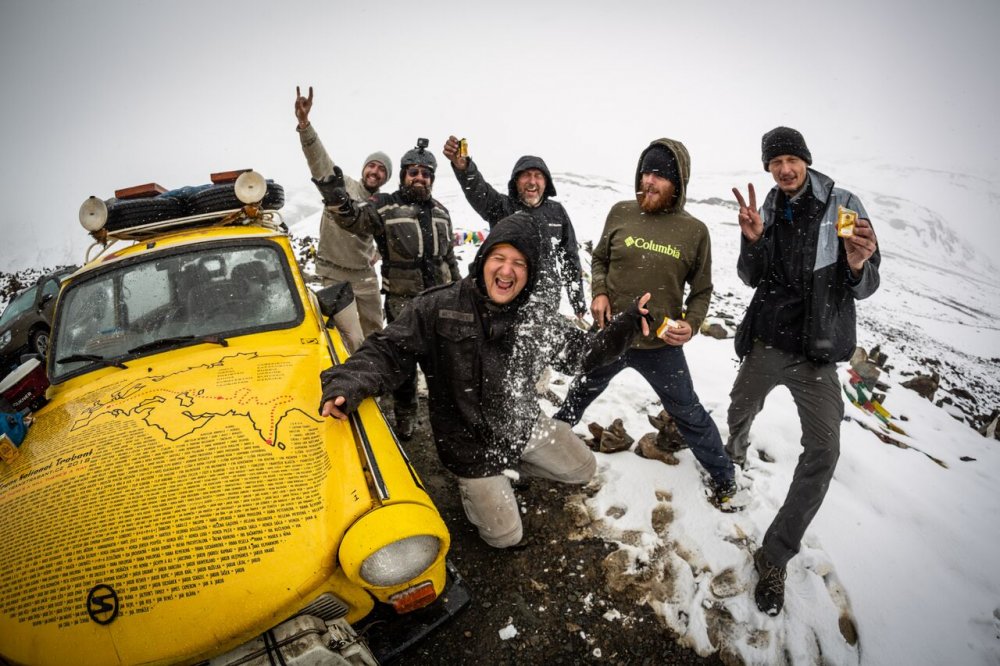 There is the last mountain pass ahead of us. After what we have been through so far, this should be a piece of cake. At least it looks that way on the map. We are descending and suddenly there is moss and low vegetation appearing. Next hill is muddy and we pass it with difficulties. A bit further we have to stop – there is a stream of water and a line of cars from both sides of the stream.

We are in a serious trouble. The stream is too strong and the rocks in water are huge. Even the jeeps are covered in sweat when passing through. It's getting darker so Dan suggests to return to the valley and try again early in the morning when there are presumably no cars. We get up super early and still in darkness we get to the critical point. The local drivers knew it was worth to stay in the line, though. The stream is even stronger and it is absolutely impossible to cross it. We contemplate and Honza, the Fiat driver, disappears. I guess I heard him say: ”I'll try it”. The engine roars and the car enters the stream through the mud. For a while, it bumps on the rocks and involuntarily stops in the middle. The chief jumps into water and scolds him like a captain of a pirate ship. We follow him to the cold water and push the car back to the bank. We are soaking wet, our shoes are full of cold water. One thing we know for sure: no chance to cross the river. The Polish Fiat is the only car with a rear wheel drive and it didn't make it. 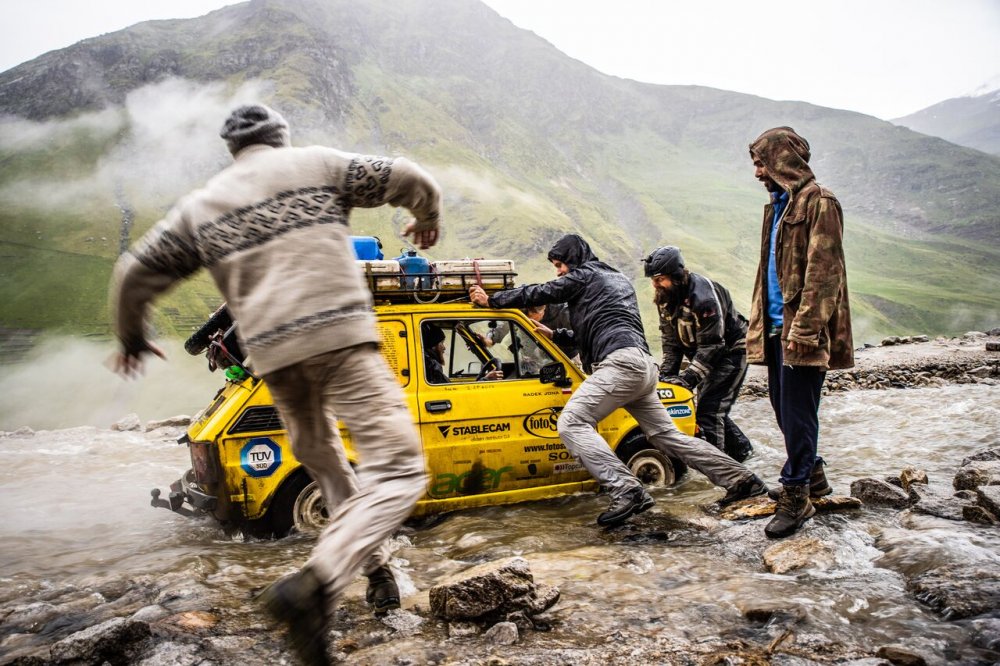 It seems to us the only vehicles managing to get through are the big Indian trucks. They are high, though and there is no place we can load them. We stop one of the drivers and ask for help.

He says he knows one place below the hill where we could load the truck. Dan likes the idea and as each proper business deal in India requires, he tries to haggle the transportation price. We collect all the money we have and give it to the driver – twelve thousand rupees for three cars. 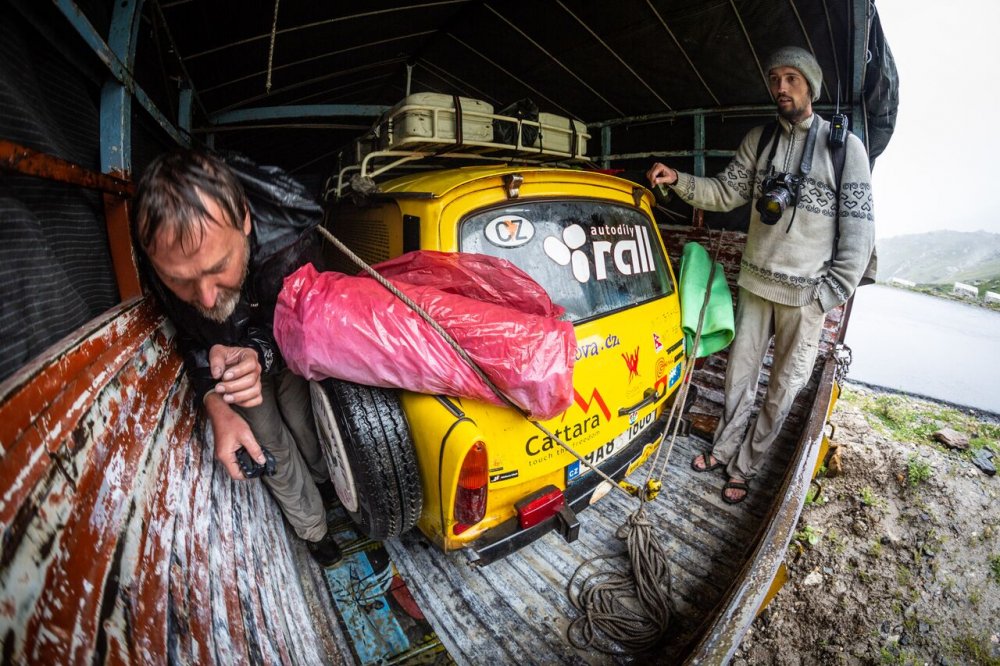 The first car and the truck are driving down the serpentines. After a few curves, we stop. The truck driver starts reversing enabling to load the car with the help of two wooden boards. Trabant is on the truck, we secure it and the truck starts ascending the hill again. Slowly, but steadily. They get through the mud, fight with the stream for a while but they make it through in the end. Yes! We did it. One by one all our cars cross the river on the road. We needed some help, but we certainly do not feel defeated. 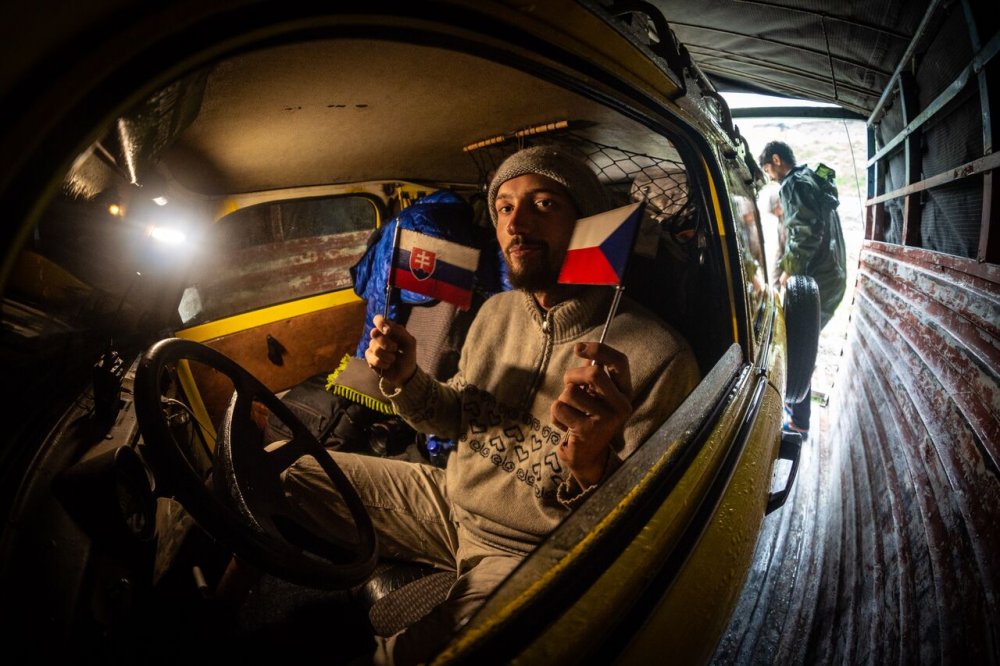 Nature is sometimes more powerful than us. The most important fact is that we did not give up and found the solution. I realized a crucial thing – it's not about how high the mountan is. The more important is what road takes you there. 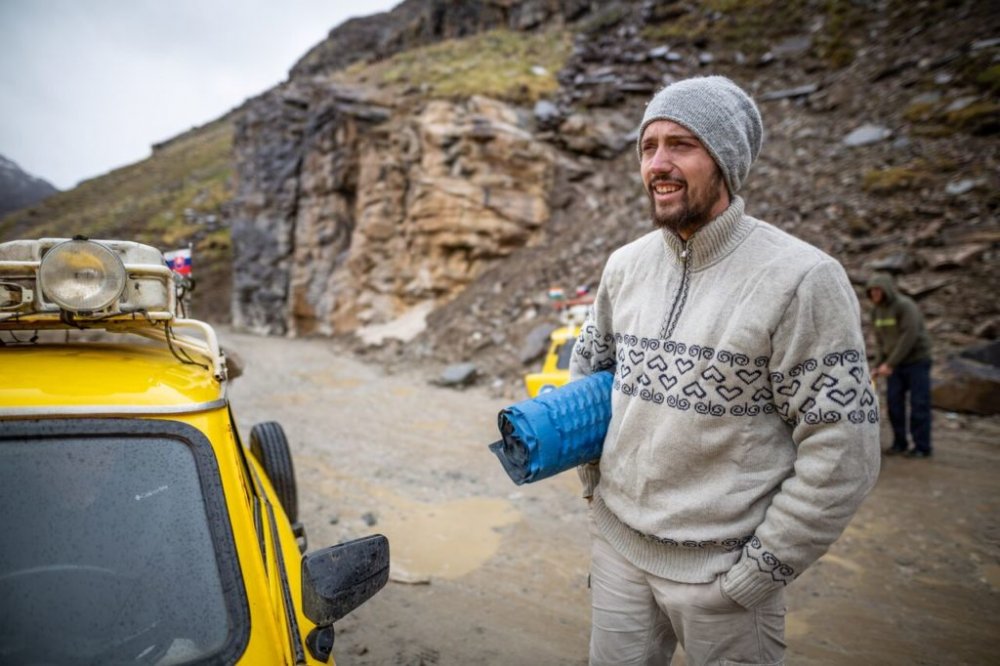 MERINO WOOL SOCKS MADE FOR ADVENTURES The secret of great adventures is hidden in details. Any experienced outdoor ...

7 SUPERPOWERS OF MERINO WOOL: WHAT'S THE SECRET? Merino wool is the basis of all our items. Why? Simply because it is wonderful ...

FIVE USEFUL TIPS FOR A WINTER HIKE One should never understimate mountains and that's especially true in winter. ...

WHAT TO WEAR FOR WINTER HIKING With decreasing temperatures, the number of hikers is falling as well. Not ...

MERINO WOOL VS. SYNTHETICS – IT DOES MATTER TO NATURE We obviously have a thing for merino wool. Nowadays, when outdoor shops are full ...

REVIEW: BLACK HILL OUTDOOR CLOTHING IN ICELAND We have received a very nice review from Michal, our customer, who tested Black ...

NEW ZEALAND New Zealand is well-known for its beautiful nature, merino sheep, and being the ...

Yellow Trabants in Kashmir I have no travel goals. There is no must-see list of countries in my head. There ...

Expedition: Caucasus 2017 The Caucasus is still a relatively exotic place to most of us, we have just a ...

How to clean and maintain merino wool clothing Wonderful material that is a must have for each outdoor enthusiast: that's ...

Wonderful qualities of merino wool Nowadays, merino wool is getting more and more popular – not only for knitting s ...

SMALL STEPS TOWARDS A GLOBAL CHANGE – REDUCE PLASTIC AND BE CLOSER TO NATURE Plastic. It's everywhere around and the initial enthusiasm about its wide-range ... Next