New Zealand is well-known for its beautiful nature, merino sheep, and being the hotspot of extreme sports. Adrenaline junkies will thrive in here. Bungee jumping, paragliding, surfing, skydiving, climbing and many more. If you enjoy mesmerizing nature views and you are not afraid of dangerous action, these islands on the other side of the world have certainly something to offer. 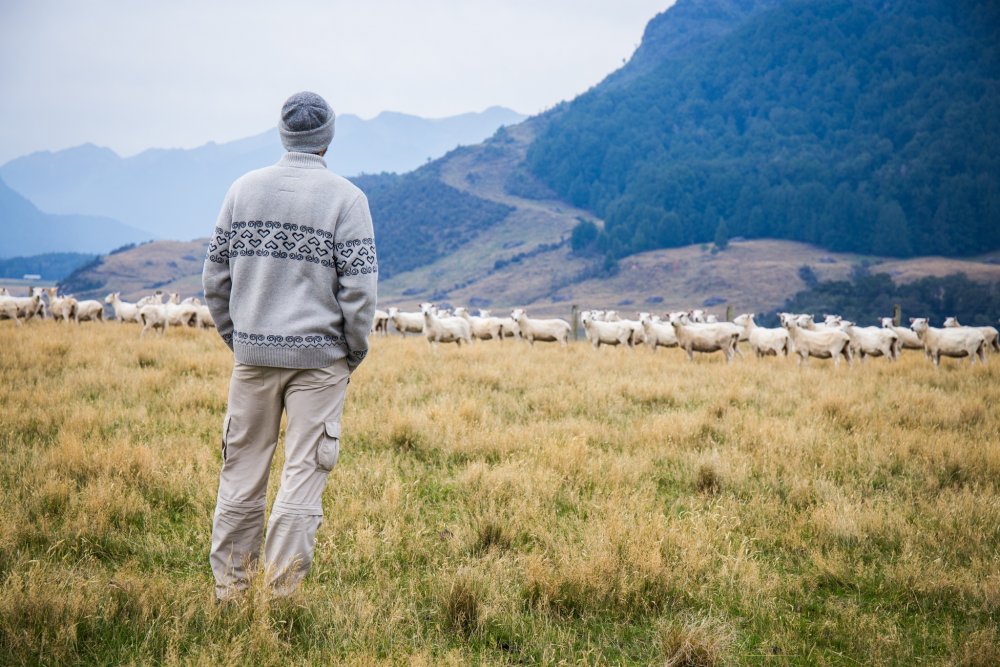 After a long flight we land in Chistchurch, the city on the Southern Island. We are as far from our home as possible. It takes quite a while to adjust to the 12-hour time difference, but we have no time for catching-up on sleep. Our time here is limited and we want to enjoy it to the fullest. We pick up a rental car and head to the bay from which we would perhaps be able to spot the beaches of Chile thousands of kilometres away – if only the world was flat. We are meeting a bunch of people trying to catch the wind to paraglide. Once we are in the paradise of flying, I might actually try it, too. 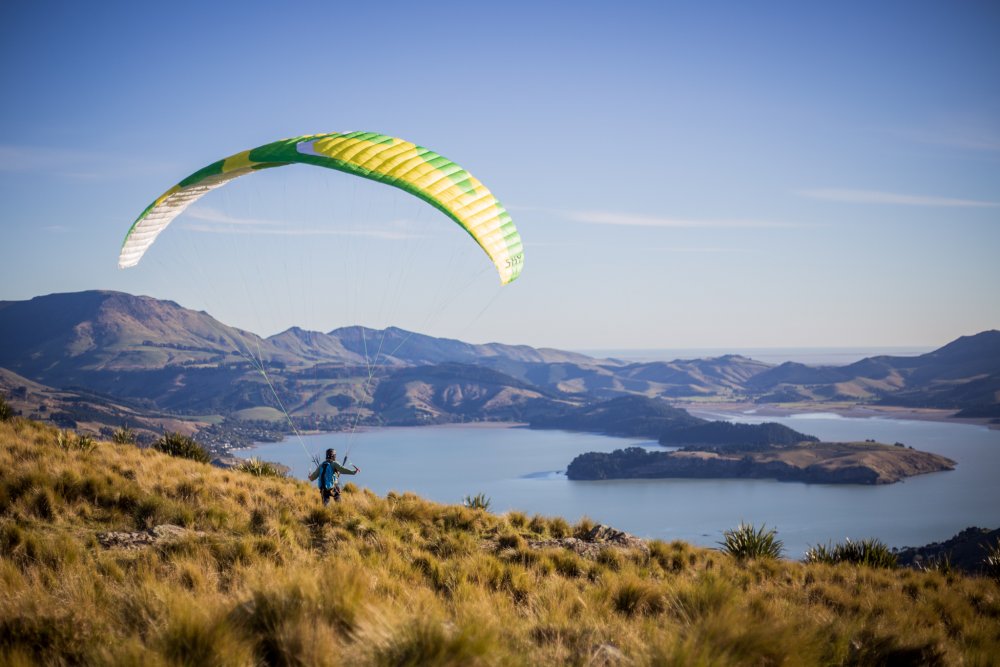 We are travelling across picturesque landscapes reminding us of Tuscany all the way to the national park around Mount Cook, the highest mountain of the island with 3,742 m. We walk along the river surrounded by a green and rocky land. Within an hour we reach the lake below the mountain, which used to be a huge glacier in the past. Due to the rising temperature the glacier is diminishing and giant ice blocks drift to the shore. We witness their calving causing big waves. There is an outdoor sitting with the mountain view. On the table I notice the appeal to take a picture and send it to the website collecting landscape images from tourists. These photographs are used to record the changes in the environment and they make us think about what is going on with our planet. 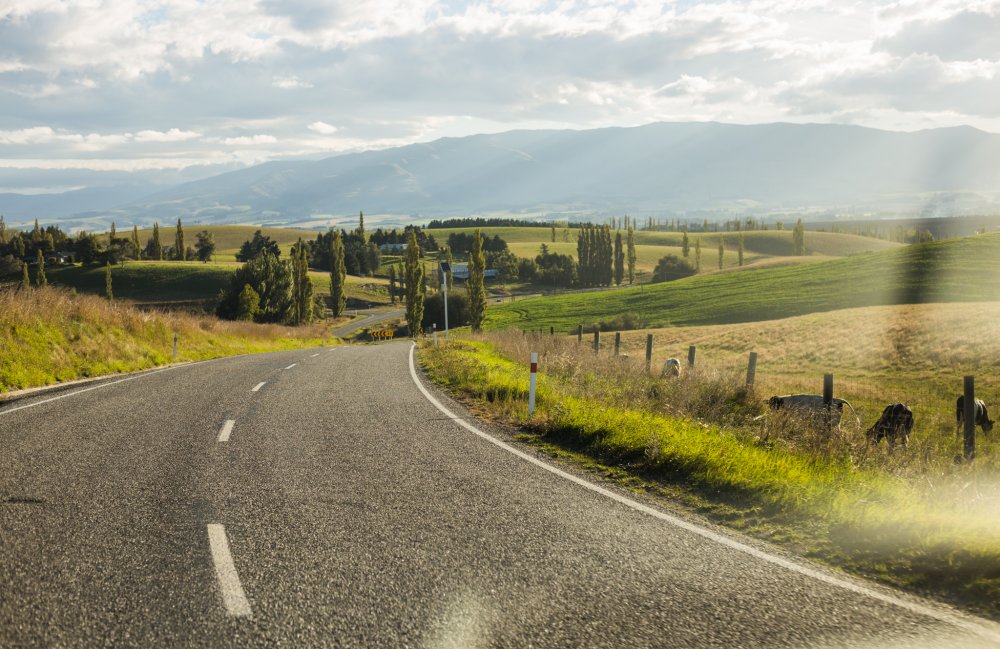 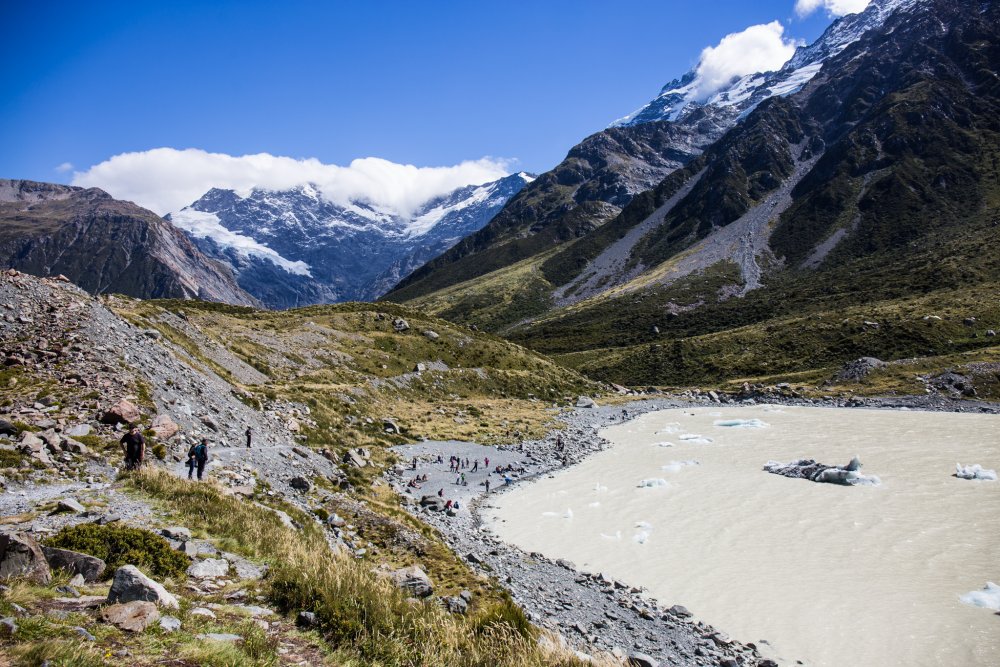 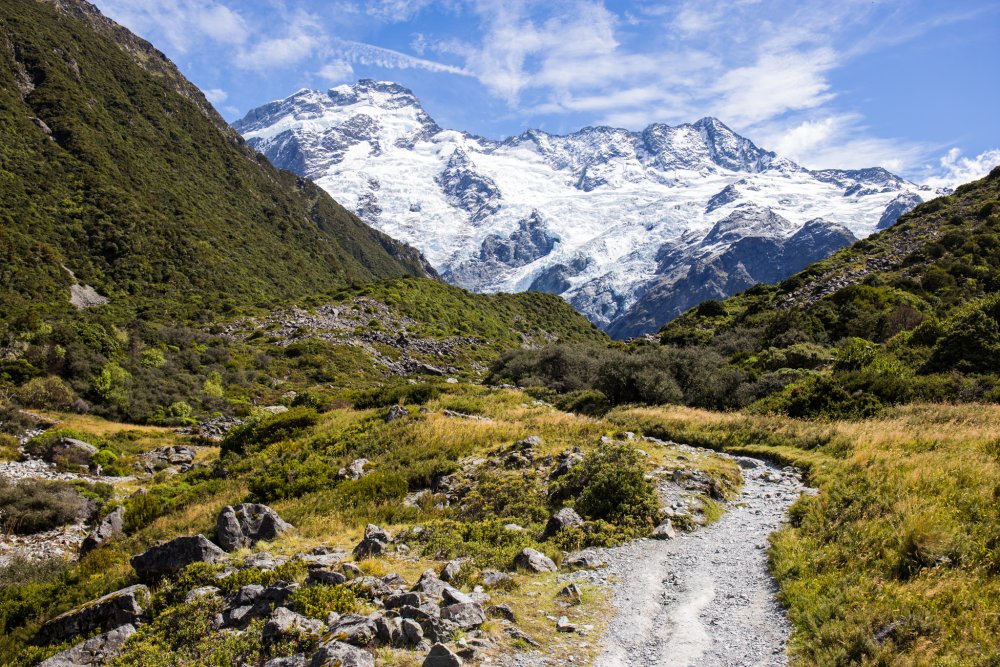 Next stop on our journey is the town of Dunedin and its bays. On the way to the edge of the peninsula east of the town, we pass warning road signs with a penguin depicted. According to the locals, you need to watch out for the birds especially before the dawn, when they leave their nests and head to the sea to hunt. We stop above the Pilots beach and walk towards the sea. Local environmentalists made hiding spots for penguins in the slopes that protect them from predators. We arrive in the afternoon, so there is no big pengin moving happening. Luckily for us, we see a few homeless penguins hiding near the path. In the bushes we spot a blue penguin, the smallest penguin species in the world. 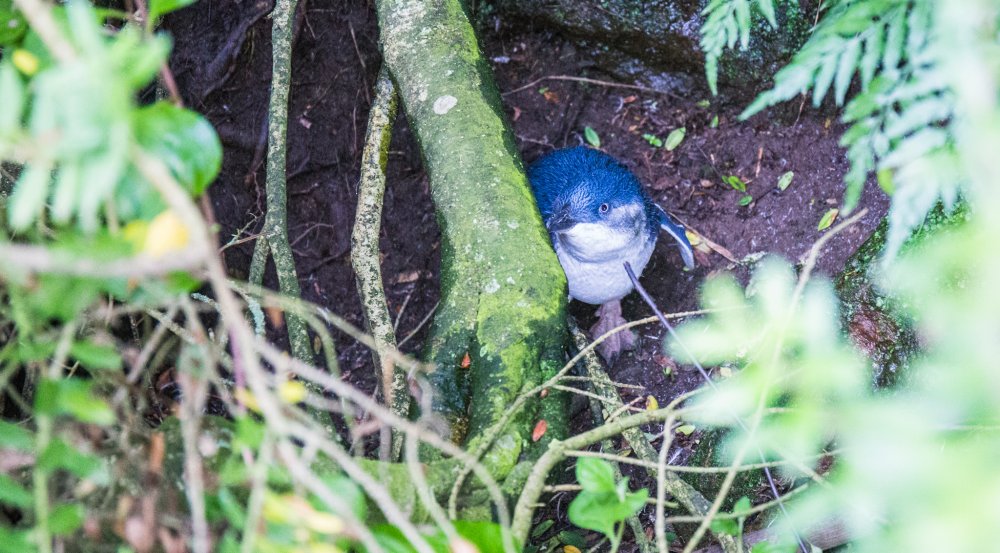 On the same peninsula, the famous Victory beach is located, too. There we could watch some seals. We walk through a forest and low vegetation and suddenly the sand appears. We take off our shoes and sinking into the sandy ground we get to the spot from where we can see the animals. Three giant seals solving an issue at that moment. After a while we realize it is a love triangle. Two males fighting for a female, which is obviously more into the younger and smaller one. The white female is hiding behind the young grey and brownish male, that exchanged a lot of bites with the old brown guy during the last thirty minutes. Their skins show more and more bite marks. We leave the beach and as we take the last look back, those two are still fighting. I wonder when the old guy finally realizes he is not welcome there. 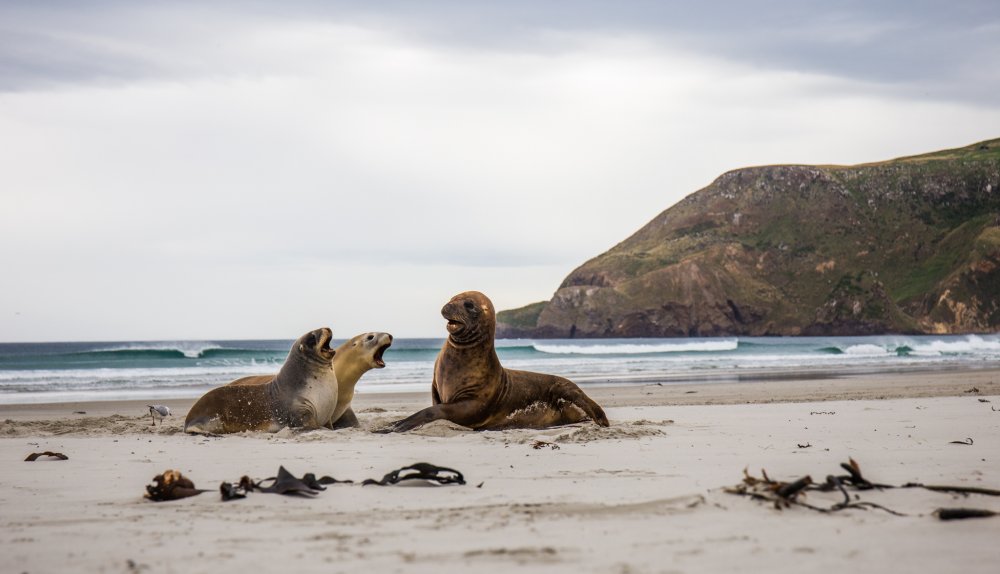 We follow the road number 1 that leads to Te Anau. The town is a gate to the fjords of the West coast. We board a helicopter from a pontoon and taking off reminds me of a really fast elevator ride. We fly over the fjords and through the headphones we listen to our pilot talking about the places that served also as the Lord of the Rings filming locations. He is a professional who has been doing his job for many years and knows how to provide a great experience. He flies quite low above the mountain peak and suddenly a wonderful view opens in front of us – a valley with a river and a few clouds scattered just below the tops of the mountains. We continue through a narrow canyon, between the rocky walls covered with vegetation and with a high waterfall on the left. At one point the pilot starts rising above the mountains and finds a spot to land for a while. There are no doubts about why they make movies in these beautiful places. 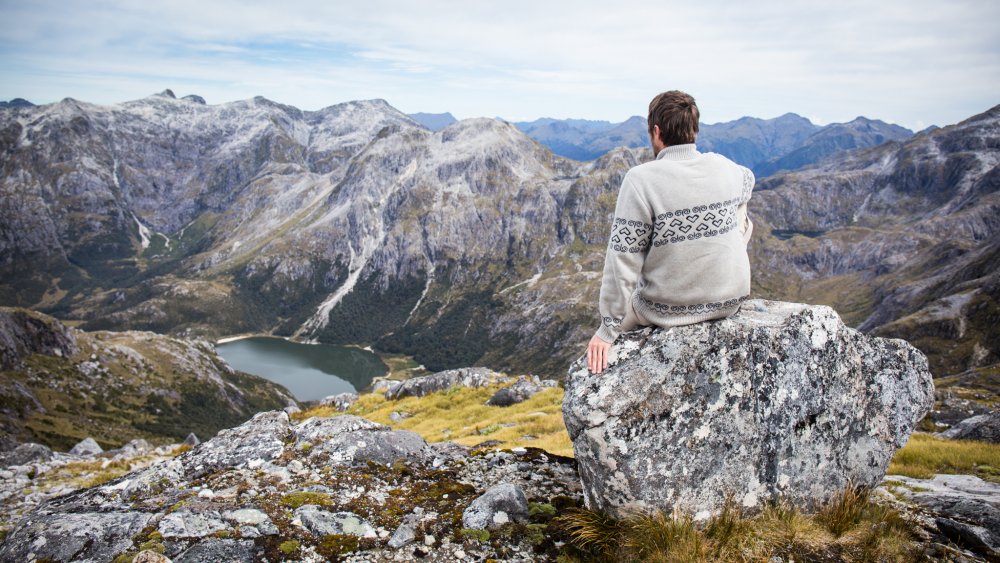 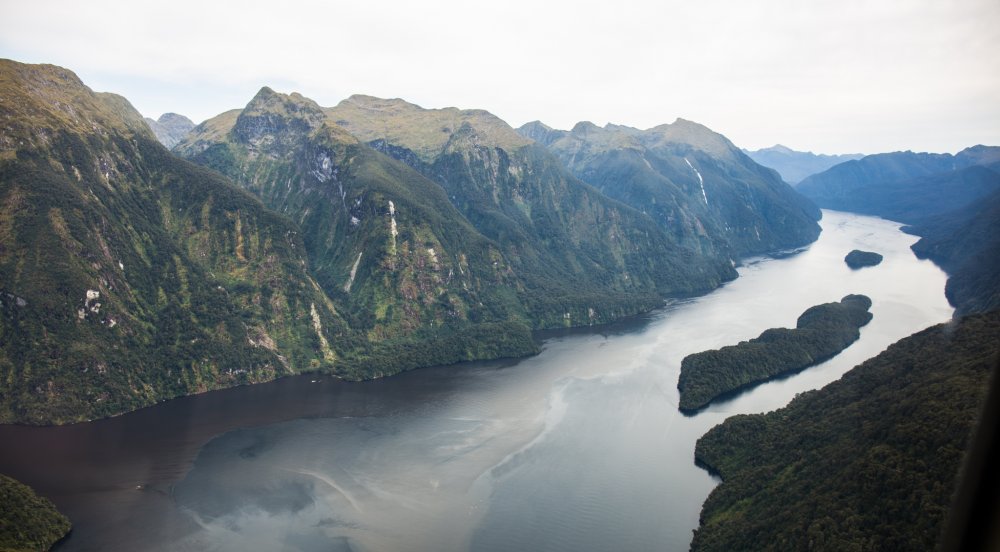 The helicopter ride was a powerful experience and would love to repeat it. Next time, though, I fly alone – with a paraglider on my back. After a few unsuccessful attempts to lift the wing above my head, I focus deeply, start running and finally it is up. I keep running and I eventually loose the ground below my feet. The first flight takes only a few seconds and I land on a meadow. It is not the last one, though. I pack the paraglider and walk up the hill. I fly for the second and the third time and I really start liking it. The idea of being able to fly just with one backpack is kind of cool. 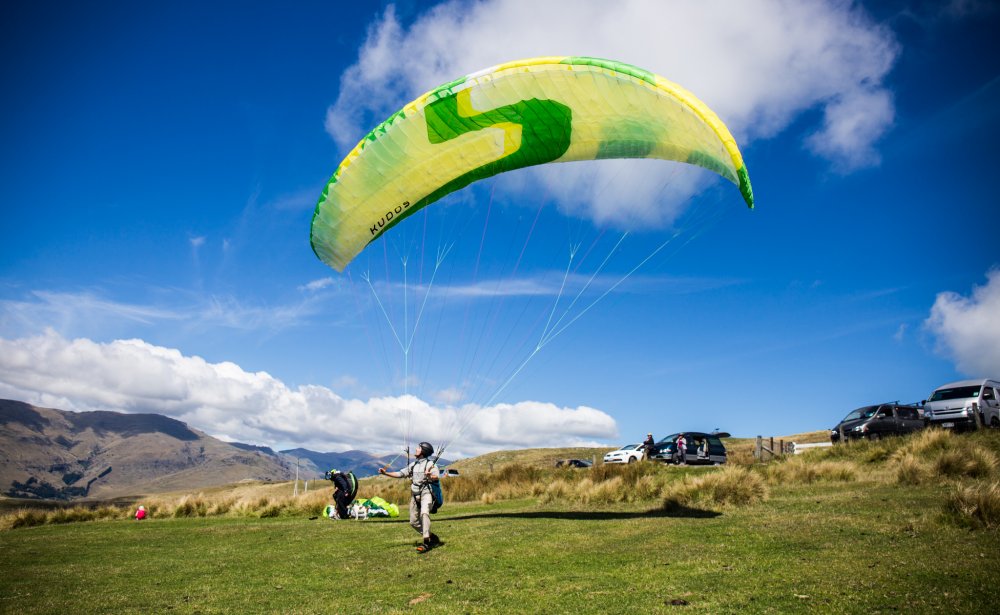 We take a plane to Auckland on the Northern Island. We travel to the unique natural phenomenon I have not seen before (and probably will not see ever again). We park our car and follow the path to the steaming stream. It is heated by geothermal energy! It is a popular spot and vistors come here all year long to warm up as the water temperature is stable. Practically it is a free thermal spa in the middle of nature. 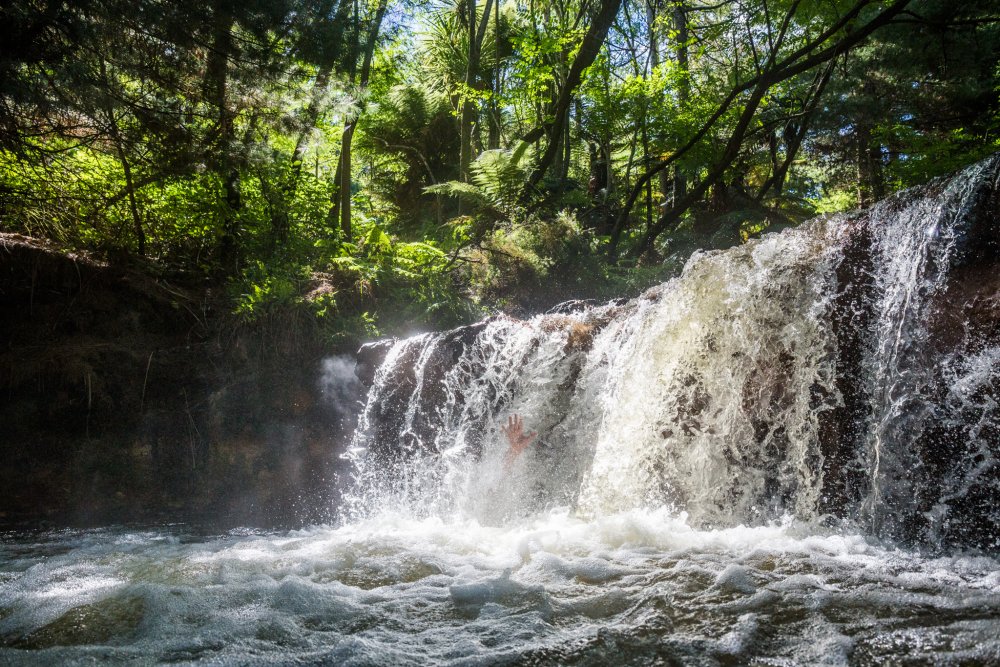 I have heard lots about the beauty of New Zealand and this journey has confirmed it all. On a relatively small area you find Tuscany-like landscapes, grazing land with sheep herds and mountains like in the Alps, glaciers, beaches like in Miami, fjords like in Norway and much much more. It is a country definitely worth to visit, even though it lies on the other side of the world.

Translated from the original written by Marek Duranský photography

New Zealand New Zealand is well-known for its beautiful nature, merino sheep, and being the ...